6. October 2020October 6, 2020
In a "social simulation" participants play various roles and take different perspectives on a specific topic, in this case the management of a watershed. Through direct interaction among players challenges are discussed and solutions developed. See in this video how this worked within the SUSFISH-plus project.

A central aim of the Innovation Platform within the SUSFISH-plus is to harmonize findings of the project with networking and stakeholder involvement in order to foster sustainable decision-making. For this purpose, an interactive strategic social simulation was organized under the guidance of the Centre for Systems Solutions (CSR), in Vienna in September 2018 and another in Ouagadougou in February 2019. Current APPEAR scholarship holders, as well as those involved in the previous SUSFISH project and researchers, came together with stakeholders from civil society and administration. This experience has now been summarized in a short video.

The focus of the simulation was the Nakambé basin which inhabits approximately 50% of the Burkinabe population including the capital city Ouagadougou. The Nakambé river has been highly impounded in order to meet the growing water demands from human activity. As such it is an area where many competing interests are confronted with challenges of sustainable water management studied within SUSFISH and SUSFISH-plus.

Within the simulation role-playing and game-like mechanisms allow for a more realistic environment in which potential solutions can be found. The simulation also serves as a learning opportunity for the involved actors and allow for the co-creation of common future visions. Three focus areas Water & Environment, Food & Fish and Economy & Energy were chosen and together Causal maps, depicting the interrelations and trade-offs, as well as future visions were created. 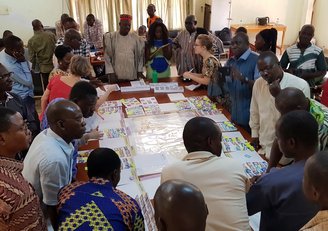