© Pamela Burger
The LoCaBreed project raises awareness of the role of women in cattle rearing. And it supports women in gaining equal opportunities to improve their livelihood.

The population of Burkina Faso is about 19.5 million; about 80 percent of them live in rural areas where crop and livestock are important for their livelihood. Women play an important role for their families by contributing to their livelihoods. However, various sociocultural constraints and stereotypes undermine the status of Burkina Faso´s women and represent obstacles to their full participation in some activities. In fact, in many societies in Burkina Faso, a woman is considered as “foreign” for her family as she has to leave when she gets married. At the same time in her new family, she is also considered as “foreign” as she comes from another family. Thus, women do not have access to land and are not entitled to inherit land or livestock.

In the Lobi society, even if cattle are paid as a marriage dowry for the bride, she does not benefit from these cattle. In the Fulani society, women do not get cattle either from their parents or their husbands even if they support in rearing cattle in addition to their daily activities in the household. Nonetheless, women are important in securing food for their families. It is in this context, the project Local Cattle Breeds of Burkina Faso – Characterization and Sustainable Utilization | LoCaBreed, would like to raise awareness of the role of women in cattle rearing and support women in gaining equal opportunities to improve their current situation. Therefore, the project members conducted two Focus Group Discussions (FDG) with farmers. The first workshop was attended by twenty male and seventeen female Fulani farmers. The second was attended by thirty-five male and twenty-five female Lobi farmers. Females and males discussed the same questions in separate groups to reduce possible gender effects on the discussion dynamics. At the end of the meeting, the results from each group were presented and discussed in a plenary session. Some of the questions discussed during the FGDs were the current roles of men and women in livestock activities during the year, the satisfaction of men and women about women’s current role, and changes in the production system from the past to the present as well as their expectations for the future.

Results show that all family members are involved in cattle management, with some differences between Lobi and Fulani. In general, much of the cattle husbandry is performed by the man, followed by his wife and children. Some management practices such as animal feeding with supplement, animal watering, animal vaccination, construction of kraals and cleaning are carried out by all family members. However, some specific tasks for the husband are purchasing cattle for the herd, choosing the herdsman, paying for animal supplement feeding, their medication and welfare, protecting animals from thieves, looking for lost animals and solving some conflicts between crop farmers and livestock keepers. Women generally take care of calves, sick animals and small ruminants. For Fulani women milking and milk processing are important tasks. They are involved in selling fresh milk, curds and milk butter. They usually process butter to soap for their household and surplus is also sold. Children often act as cattle herders.

Differences could be observed between the ethnic groups. Fulani men are satisfied with the current role of women and their contribution in cattle husbandry, whereas women complained about not receiving sufficient support from men in their activities and income from cattle sale is completely kept by men. On the contrary, Lobi farmers recognize the contribution of women who work as herdswomen and provide support in different activities. 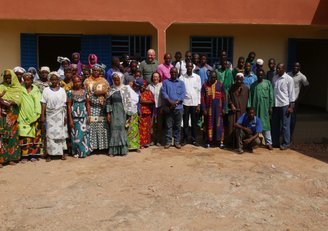