© Anna Wäger / this human world
In collaboration with the Vienna-based film festival this human world, APPEAR organised an evening at the Top Kino Vienna. In this event, researchers of the APPEAR project ROOTDEVPAL in Palestine were invited as speakers for the discussion after the movie "The Judge".

On the 7th of December the movie "The Judge" was screened at the Top Kino in Vienna. The movie explores the story of Judge Kohloud, the first female judge to be appointed to a Sharia court in the Middle East. The film shows the challenges she faces in a deeply patriarchal society.

After the screening of the movie, the advisory board member of the APPEAR project SHE-GE and project partner in the APPEAR project ROOTDEVPAL Helmut Krieger, together with the PhD candidtate at the University of Vienna Noura Salah Aldeen, gave additional input on current developments with regard to gender equity and the situation of women in the region. They highlighted their point of view, which is the danger of a single story as shown in the movie. Furthermore, they elaborated on the wider context in order to enable the audience to get a more comprehensive picture on developments in Palestine in general, and as with regard to the role of women in the society and the Sharia court in particular. The womens' movement in Palestine is about 100 years old. What the limitations of basic conditions are is one of the more interesting questions to be considered and a complex topic to be discussed. 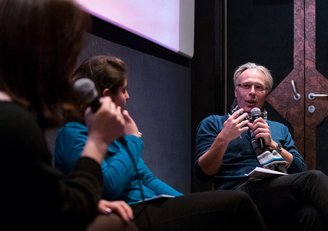