© Nikoleta Nikisianli
It was no lecture that was given during APPEAR in practice_10, which took place on 23rd of October at OeAD. Rather, the floor was opened after short introductory statements and the majority of the time was allotted to a discussion with the audience of about 60. The format of the event did justice to its title “The art of achieving inclusive education”, and it reflected the considerate and transdisciplinary mode of collaboration of the INEDIS project partners featured that evening.

INEDIS is a partnership project between Addis Ababa University, University of Vienna, Dilla University, and Gondar University. Its goal is to facilitate inclusive education for students with disabilities at university level and to strengthen the ability of higher education institutions to contribute to inclusive community and school development. In the course of the project, as Mr. Ababu Teshome Ayalew (University of Dilla) pointed out, at Dilla University a resource centre for persons with disabilities, families, community workers and teachers will be established and a certificate course on community-based rehabilitation will be launched.

These efforts home in on inclusion, a concept, as Dr. Berhanu Dendena Sona (University of Dilla) explained, that goes beyond integration in that it does not separate between groups, but aims to create an environment that includes everyone with their variety of talents and limitations. Achieving this is not only an art, it is also, as Dr. Michelle Proyer (University of Vienna) put forward, a continuous process. It is the task of research, she continued, to provide data to facilitate this process. This is best done in a transdisciplinary way and in partnership with relevant stakeholders in Austria and internationally. Team Barrierefrei, for example, gains a lot of insights by counselling students with disabilities at University of Vienna, as Tim Brunöhler (Team Barrierefrei) explained.

Ethiopian and Austrian experiences in the framework of INEDIS was shared that evening and further discussed in the subsequent reception with snacks and drinks. APPEAR in practice is an event series that invites project partners to reflect on and discuss their experiences referring to a specific topic in the project implementation process of their partnerships.

Ababu Teshome Ayalew (Dilla University / Ethiopia). He is lecturer and coordinator of the Centre of Learners with Special Needs Education at Dilla University (DU). As a INEDIS project team leader he is coordinating research on inclusive community development and the CBID post-graduate program at DU. His research focusses on inclusive education for students with special needs, community-based Rehabilitation, education of children with visual impairment, HIV/AIDS and disability, and disability and society. 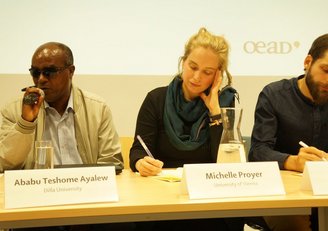