© APPEAR
APPEAR in practice_8 was dedicated to the water-energy-food security Nexus in Uganda and Kenya. This event was organised in cooperation with the Natural History Museum Vienna.

Full tank or full a stomach was the title of this event that took place on the 2nd of May 2018.

Jakob Lederer from the TU Wien / Vienna University of Technology and project coordinator of the CapNex project at first presented the topic as such and their activities in the framework of the project. Afterwards, together with his colleague Mathew Herrnegger from the University of Natural Resources and Life Sciences, Vienna they engaged in a discussion and answered questions by the audience.

The presentation began with a general introduction to the topic of the nexus, with reference to the sustainable use of natural resources based on the study of the Nile in Ethiopia - the Assuan dam and the Nasser reservoir - both of which are used as a source of energy, food and drinking water. The Nile is a lifeline for the region, but due to the population growth and the increased demand and use of water its use is endangered both in quantitative and qualitative terms. The challenge for scientists is to figure out how a sustainable use of the Nile can be guaranteed. Here the nexus approach comes into play. The objective of the nexus approach is the sustainable use of resources to provide water, energy and food. One of the challenges is the implementation at local, regional and national level. Jakob Lederer then introduced the CapNex project, in which an interdisciplinary (agronomy; crop production; pest management; development studies; hydrology; socio-hydrology; soil science; waste-, & resource management) team of Austrian, Kenyan, and Ugandan researchers cooperate in order to build capacity building through research, training and dialogue.

In the discussion that followed Mathew Herrnegger and Jakob Lederer further elaborated on the topic of sustainable use of natural resources, the role of further stakeholders and collaboration with the public sector, the influence on university teaching and the challenges with regard to the availability and quality of data. Amongst other things, they highlighted the fact that it is of utmost importance to train people and to equip them with the right tools, meaning technical equipment and skills. They further explained that to some extent the data situation is not optimal. It is challenging to figure out how much is deforested and reforested again and the quality of the provided meteorological data is partly not sufficient in order to be further used in the analysis.Furthermore, they criticised that publications that do not refer to a regional context do not allow coming up with specific solutions. The nexus approach has to be examined on different levels, not only on national level, but also on district and county level otherwise it will not be tangible and the term nexus is in danger of just being reduced to a buzzword. 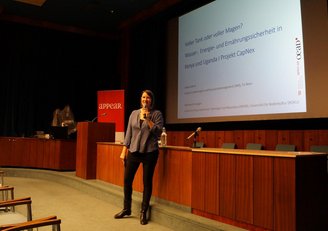