© Elke Stinnig
APPEAR in practice_7 was dedicated to sustainable fish management in Burkina Faso. This event was organised in cooperation with the Museum of Natural History Vienna.

Burkina Faso. When fish fall from the sky.

“40 degrees Celsius and no rain” is, according to Andreas Melcher, the typical weather in Burkina Faso. The fish ecologist has conducted research in Burkina Faso for several years in the framework of the APPEAR project SUSFISH. The land locked country in the Sahel region is challenged by chronic water scarcity and episodes of severe drought. In the last decades water reservoirs have been built, which support the livelihood of the population and are used for farming, cattle raising and fishing. However, since the 1960s, the population has also increased dramatically from 4 million to 19 million. The growing water consumption and continued human pressure on the freshwater ecosystems have caused pollution and have threatened the ecological diversity in the reservoirs. Fish is important for food security in Burkina Faso and reacts very sensitively to anthropogenic pressure. Besides Burkina Faso is one of the poorest countries in the world, ranked at 185 according to the Human Development Index (HDI). APPEAR as the university cooperation programme of the Austrian Development Cooperation (ADC), aims to improve the livelihood of people in low-income countries by means of applied and demand driven research. Following this approach SUSFISH promotes the sustainable management of water and fish resources and intends to increase food security in Burkina Faso in the long term.

As a strength of SUSFISH, Andreas Melcher emphasized the transdisciplinary team of the project, which includes scientists from different disciplines, political stakeholders and fishermen. In the first project phase, biological sampling and mapping of fish and benthic invertebrates was carried out. Different fishing methods (cast nets, longlining, electrofishing) were used, more than 45,000 fish were caught and identified. The information on the taxonomy and geographical distribution of the fish species was made available in a national database at the University of Ouagadougou. An official red list of threatened fish species was developed together with the IUCN – International Union for Conservation of Nature of West Africa and a reference system for specific sites was defined. In addition, standardized screening methods for the water quality were developed by using bio-indicators (fish and benthic invertebrates). The generated knowledge will help decision-makers to improve fish and water management, and to raise awareness among the local population concerning the ecological status of the reservoirs. “Fish can fall from the sky”- this is still a widespread belief among the local population in Burkina Faso. During their life cycle fish inhabit a wide variety of aquatic habitats and can appear but also disappear. The idea that fish fall from the sky can cause an overexploitation of the fish resources. In his talk, Andreas Melcher stressed the importance to study the ecological and social aspects of fisheries. As in other West African countries two different government systems are in place in Burkina Faso – the republican and the traditional government. In practice, this means that it is not always clear who decides or whose decision is taken seriously. If one would like to induce social transformation, a deep understanding of the complex social structures in Burkina Faso is a prerequisite. Furthermore, SUSFISH tries to bridge the gap between traditional and scientific knowledge.

Answering the question of what he personally learned from this research partnership with the colleagues in Burkina Faso, Andreas Melcher stated that respect for different cultures and knowledge systems as well as patience, trust and the focus on the positive aspects of the cooperation was required.

Apart from its ecological components the project also focuses on capacity building at the involved universities. Within SUSFISH, two people from Burkina Faso completed their doctorate at the University of Natural Resources and Applied Life Sciences, Vienna (BOKU), 26 master’s theses were supervised at the University of Ouagadougou and Bobo Dioulasso and four BOKU master’s students conducted their field research in West Africa.

SUSFISH is based on Raymond Ouedraogo's experience working in the Fisheries Ministry in Burkina Faso and on his doctorate, which he completed in 2009 at BOKU. He initiated an APPEAR Preparatory Funding, which resulted in a three-year partnership (Academic Partnership). The latest project application (Advanced Academic Partnership) was also successful. Therefore SUSFISH-plus will be able to contribute to sustainable fisheries and improved livelihood of the people in Burkina Faso for the upcoming three years. 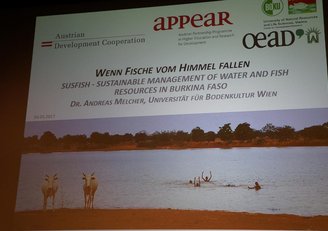 © Elke Stinnig
+12
The picture shows Andreas Obrecht as he is giving a speech at a speaker's desk. There is a roll-up reading "appear" in the background.
A man is standing at a speaker's desk and looking up at a large screen. The logos of the appear programme, of the BOKU, the OeAD and the Austrian Development Cooperation are shown on the presentation that is projected onto the wall.
Two people are sitting somewhere and smiling into the camera.
Several people as part of an audience, sitting on blue chairs.
Six people as part of an audience, sitting on blue chairs
The picture shows part of an audience that is sitting on blue chairs.
Two people are standing in front of an audience in a lecture hall. One of them is interviewing the other. A large screen in the background shows a presentation. Next to the screen is a red-and-white-coloured roll-up.
Two women are sitting on blue chairs, smiling.
Andreas Obrecht is interviewing Andreas Melcher on the podium of an auditorium, both are smiling.
Andreas Melcher and another man are standing in an auditorium, smiling.
Three men are standing around a table in a room with marble walls, holding drinks in their hands.
One woman and four men are standing around a table with drinks and pretzel sticks on it. There are marble walls and a beautiful staircase in the background.