29. June 2020June 29, 2020
The Armenian BOAA project partners at the Armenian National Agricultural University (ANAU) have produced a video that introduces the new Master's Program in Organic Agriculture to potential future students and other interested stakeholders. The master's program started in September 2020.

The Master's Program in Organic Agriculture  has been developed by the Project Building Organic Agriculture in Armenia | BOAA . The Armenian National Agricultural University (ANAU) in collaboration with the University of Natural Resources and Life Sciences, Vienna (BOKU) designed the program to cope with grand agricultural and ecological challenges such as biodiversity loss, health and nutrition, and climate change. It does so by supporting the development of the local Armenian organic sector. The program was developed in a transdisciplinary way including various stakeholders from the Armenian agri-food system in the process.

The Armenian partners of BOAA have invested a lot of time and effort to make the people in Armenia aware of their newly developed master program for organic agriculture. One of their many promotional activities was the development of a short video introducing the new Master's Program in Organic Agriculture to potential future students and other interested national and international stakeholders. The video has been distributed on many social media platforms.

The aim of the master program is to equip professionals and researchers with relevant scientific and practical knowledge of organic agriculture. It is a two-year, full-time master’s program that follows international education standards. As organic agriculture encompasses many themes, the program plans to train students on a broad level with possibilities to specialize within a required summer internship and the master’s thesis.

The classes of Organic Master's program started in September 2020. 13 students with diverse educational backgrounds got accepted. BOAA team welcomed the students and introduced the program during the first offline class. It was important for the BOAA team to introduce the students BOAA project, the funders of the program and of course the team that has worked during the 3 years. 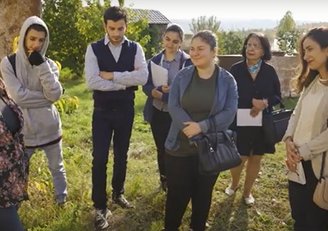