© Itta Francesca
Two APPEAR scholars shared their impressions and experiences following the screening of two films on the Ethiopian civil war and the period following the political uprisings in Burkina Faso in 2014.

In cooperation with the International Human Rights Festival “This Human World”, APPEAR presented the film days “Wissen.Schafft.Entwicklung” at Vienna’s Top Kino on 29 November and 1 December. The film days presented development-relevant research and cooperation at a classical place of encounter – the cinema. The focus was on film and discussion about development policy issues of global relevance.

The documentary film “After Your Revolt, Your Vote!“ provided an insight into the nationwide mobilization for peaceful and democratic elections after the Burkinabe popular uprising of 2014, which was inspired by the ideas of the murdered revolutionary and president Thomas Sankara. The street protests led to the fall of the autocratic regime under president Compaoré, who had attempted to further secure his power for life through a constitutional amendment. After almost three decades various civil society actors as well as opposition members have taken to the streets peacefully for a future worth living and have contributed to a fundamental change in the country. After the fall of the president they called for peaceful, democratic and free elections.

Following the film Dominique Ouedraogo, scholarship holder in the APPEAR project LoCaBreed and doctoral student at the University of Natural Resources and Life Sciences, Vienna and the University of Dedougou in Burkina Faso, talked about the changes in the country ahead of the elections in 2020. He expressed his appreciation for the choice of the film and the interest in Burkina Faso. “As young man, who took actively part in the revolution in 2014, it is always with great memory and deep emotions to see this film and recall one of the most important events in the recent history of my country. I was also among the millions of people in the streets of Ouagadougou to claim the respect for our constitution”. Five years after the fall of the former president he still has the feeling “that our generation made history and the people of Burkina Faso gave a lesson to other people around the world suffering of injustice and dictatorship. This lesson is: No one is stronger than the people and when the people stand up, dictators shake”.

On the second day of the festival the drama “Fig Tree” by Aäläm-Wärqe Davidian told the story of two young people who keep their love secret in the turmoil of the Ethiopian civil war because of religious differences. Between intense feelings and dangerous routine the film depicts a culturally, religiously and politically complex society. After the film Girum Gebremariam, APPEAR scholar in the project AAPLHRE and doctoral student at the Karl-Franzens University of Graz and Addis Ababa University, shared his experiences of the social upheavals in Ethiopia and his impressions of the film. For him film is “one of our most powerful forms of storytelling. The movies have the power to drag us into the world of the story. The film “Fig Tree” has clearly reflected this reality by screening the hard facts of the situation in Ethiopia under the socialist military regime (1974-91). The film allows us to capture the deeper truths of the turbulent images of the events which shattered the lives of people from all walks of life especially the young ones back then. While the film tells the story of two young people who are keeping their love affair in secret it also exposes the massive human rights infringements associated with forced conscription of young students. This is a powerful film that deserves to be watched, though the story had an ill-fated ending for the woman with grief and pain of having a loved one gone missing for good.” 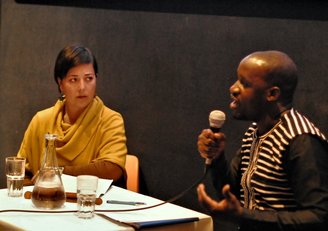