Selecting the best young bulls in a participatory manner

© Dominique Ouedraogo
Community-based breeding programmes, as implemented in the LoCaBreed project in Burkina Faso, involve all local stakeholders from designing and planning to the implementation. The aim is to improve local cattle breeds, without inclusion of “exotic” genetic material.

Several genetic improvement strategies have been implemented in Burkina Faso by the government, development projects and by individual initiatives, with the aim of improving the productivity of local cattle. These often involved importation of semen or live animals of European or American breeds for crossbreeding to improve milk production in semi-intensive farms in peri-urban areas. However, the results remain below expectations in most cases and reflection continues to find an adapted breeding strategy which can improve productivity and contribute to a better conservation of local cattle breeds.

Farmers in the project area in the South-West of Burkina Faso keep either a pure African taurine cattle type called Lobi, which is very small in body size but tolerant to a dangerous disease caused by trypanosomes, or they keep animals that are crossbred with local Zebu cattle, which are much bigger but less tolerant to trypanosomosis. Three breeding programmes have been implemented, one for Lobi cattle in Bouroum-Bouroum and two for Lobi x Zebu crossbreds in Loropeni and Kampti.

The main interest of farmers is to have bigger animals, better suited for ploughing and providing more income from sale. For this to work, they also must be trypanotolerant. The weights of young bulls, aged three to five years, were recorded twice, at an interval of 6 months. For the bull selection events in June and September 2018, the project team grouped bulls into three groups (top, medium, inferior) based on current body weight and growth over the last six months. Farmer selection committees consisting of three men, two women and one young person less than 25 years of age made their choice of best young bulls based on this information and their own criteria. Farmers main criteria of selection were body characteristics (body size, coat color), the possibility of double use (ploughing and mating) and the market value of bulls. The three best bulls selected by the committees were only partly from the top groups based on grouping of the project team. Bulls were awarded by the project team, as were the most cooperative farmers. Decision was taken by the farmers which bulls to keep for breeding and which ones to castrate or sell out, to avoid undesired mating. The participation of farmers was great, they accepted the involvement of outsiders (i.e., the project team) to support their decisions on which bulls to select for breeding. Joint use of bulls and bull swapping are still being negotiated by farmers, as they have not been used to this. The next bull selection event in May 2019 will be a proof-of-concept test for the acceptance of participatory cattle breeding in Burkina Faso. 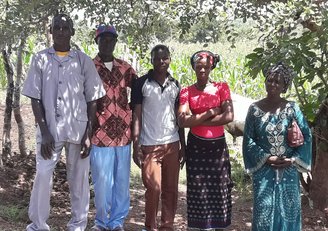