© Josef Baernthaler
In September 2018 the project team from FH Joanneum visited their partners at the campus in Chimoio, part of the University of Zambeze.

On the first day, the principal and the Austrian project partners were personally welcomed by the Mozambican team at the Chimoio campus, which is part of the University of Zambeze. A big opening event with more than 200 people in the auditorium was organised. The Rector and Dean of Faculty, as well as the Austrian coordinator on behalf of the FH Joanneum welcomed the participants and gave insight into this project, which is working on the first curriculum in Mozambique dedicated to renewable energies. The national TV was invited and the broadcasted a report broadcast about the RETEM project nationwide.

After the speeches the project team visited the field laboratory and the spaces dedicated specifically to the RETEM project. 20 computer workstations were funded through this project and have already been put into operation. Subsequently, these workstations will be used for e-learning with moodle. As part of this project meeting several workshops were held which dealt with a focus on renewable energies. Participants were introduced to the Hydro Power module, power plant types and energy components were discussed.

Every day a RETEM project team meeting was held to plan project-specific topics such as project schedule, budget, moodle, curriculum, etc. Subsequently, the modules hydro power, biomass, photovoltaic and wind power will be developed and the development of the e-learning platform will be promoted. 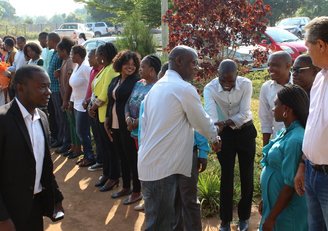