27. March 2018March 27, 2018
From the 19th to 22nd of March 2018, one of the biggest international social work conferences on the African continent took place in Kigali, the capital city of Rwanda, the Land of a Thousand Hills. Under the theme “Professional Social Work and Sustainable Development in Africa”, 500 researchers, educators, practitioners, policy-makers and students came together in order to discuss key challenges of African societies in the 21st century, to deliberate on the role of social work, and to establish national, regional and international networks. The delegates came from 25 countries in Africa, America, Asia, Australia, Europe and the Middle East.

Apart from more than 150 presentations, the conference also allowed for social action: On World Social Work Day, participants marched on the streets of Kigali, thus advocating the relevance of social work in sustainable development, social justice and human rights, and making the power of the profession visible to the public. In addition, the delegates gathered at the Kigali Genocide Memorial in order to commemorate the 1994 genocide that caused close to one million casualties, and laid down a wreath on behalf of the international social work community.

The conference was launched under the auspices of CRISOWO, the East Africa Centre for Innovation and Research in Social Work. It was sponsored by APPEAR, the Austrian Partnership Programme in Higher Education and Research for Development, and subsidized by UNICEF Rwanda.

One of the conference delegates called this conference an “inspirational international social work conference”, and indeed, it was. It was another milestone in the achievements of the PROSOWO project with its aim of promoting social work education and practice in the East African Community. In the case of Rwanda, representatives of the responsible Ministry of Local Government have become aware of the potential role of social workers in social development and poverty reduction programmes. 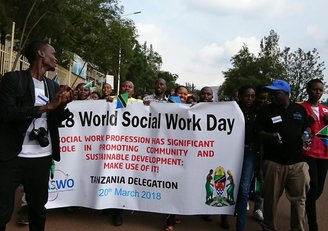